On the 80th anniversary of the Battle of Juminda, the Estonian Maritime Museum opened the exhibition in the Seaplane Harbor “Hell on the Baltic Sea. Juminda Maritime Tragedy 1941 “. The exhibition, based on the stories of people and ships, was completed in cooperation with award-winning creators from the Estonian film world.

“The tragedies of Pearl Harbor or Dunkirk are known worldwide. However, the battle that took place near the Juminda peninsula during the evacuation of Tallinn lasted for two days, from 28 to 29  August 1941, took with itself twice as many souls. We found that this is a story that is largely unknown to both Estonians and the world, which needs to be opened,” said Urmas Dresen, one of the initiators of the exhibition, the director of the Estonian Maritime Museum.

According to film artist Katrin Sipelgas, the exhibition tells the story between the threatening night waves, from the eve of tragic events and the night in the minefield to the dramatic escapes, based on people’s memories.

The curators of the exhibition are Sander Jürisson, Roman Matkiewicz, Arto Oll, Aivar Jürgenson and Urmas Dresen. The authors of the design are film artist Katrin Sipelgas and architect Ülo-Tarmo Stöör, directors Jaak Kilmi and Kiur Aarma, and the graphic design has been created by Daniel Villems.

The second museum building of the Estonian Maritime Museum, Fat Margaret, which has won pan-European awards for its recent renovation, is open Monday to Sunday from 10 am to 7 pm, as of October from Tuesday to Sunday from 10 am to 6 pm. In addition to the family-centered and accessible permanent exhibition dating back to the Middle Ages, a photo exhibition dedicated to the 85th anniversary of the baptism and launch of the submarines Lembit and Kalev is open in the gallery of the artillery tower.

The museums can be visited upon presentation of COVID-19 vaccination, recovery, or negative test certificate. The requirement does not apply to children and young people under 18 years of age.

Website of the exhibition “Hell on the Baltic Sea”: 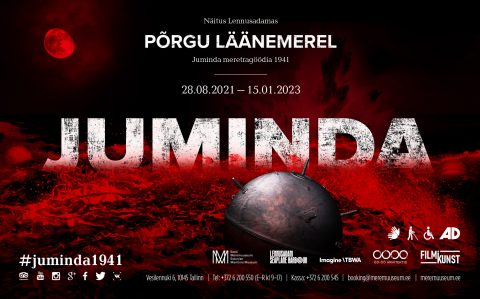