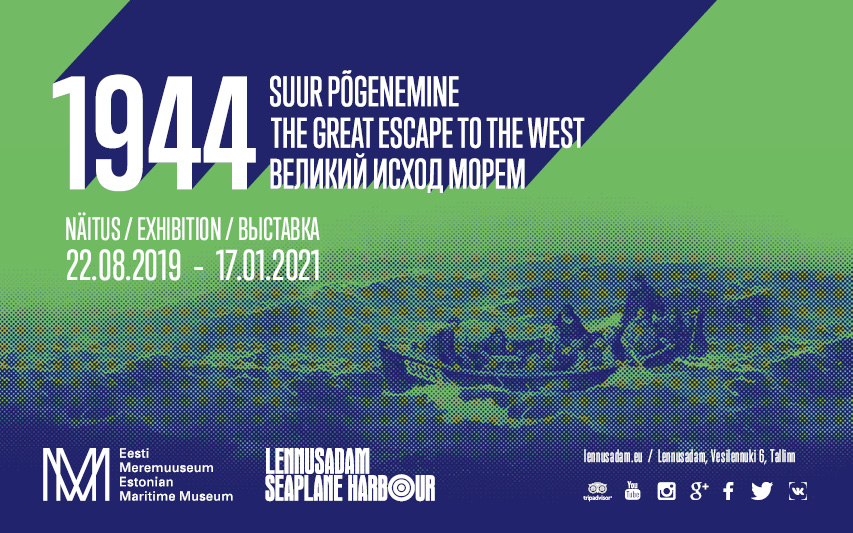 Estonia’s course in the twentieth century changed completely in the summer and autumn of 1944. In Ida-Viru County, in the Sinimäed Hills, Estonian, German, Flemish, Walloon, and Norwegian soldiers could initially resist the Red Army’s offence, so that many people were able to escape to the West. However, towards the end of summer and early autumn, the battle front had advanced rapidly. It is estimated that about 70,000 to 80,000 people left Estonia because of war and for fear of a new occupation.

One of the questions the Seaplane Harbour’s audio-visual exhibition ‘1944 – THE GREAT ESCAPE TO THE WEST’ poses is whether to stay or to go when fate takes a darker turn. If you go, where will you go and for how long? Will it be easy to abandon your loved ones and your homeland? What will become of Estonia?

Those were the questions eating away at the hearts of thousands of Estonians in the late summer and early autumn of war-filled 1944. Nobody would have guessed they would be away from home for half a century. Travelling to an unknown place was terrifying, but the memories of 1940 and 1941, the Soviet occupation, were even more gruesome. Nobody anticipated that many of them would never return to their homeland.

The exhibition entails seven escape stories of Estonians that went to Sweden, Finland, and Germany. A lot of the refugees were from the Estonian coast, the islands, and larger cities. People left by car, on horses, or on bicycles; some even went on foot. They crossed the sea using fishing boats or larger vessels. On land, trains and caravans were bombed by planes; the sea was full of mines. About 42,000 people made it to Germany and to areas occupied by Germany, whereas about 27,000 people made it to Sweden.

Among the permanent exhibition of the Seaplane Harbour, two refugee boats can be seen. One was first used by young men from Juminda, who escaped to Finland just before World War II erupted, then used again a year later when they left for Sweden with their families. The other boat was used by men from a coastal village on Saaremaa island; one of the men managed to use the bigger boat to send their family to Sweden, as well.

The temporary exhibition ‘1944 – THE GREAT ESCAPE TO THE WEST’ in the smaller exhibition hall of the Seaplane Harbour offers installations and touching stories. Visitors can be immersed in the stories of those who left Estonia; stories that are just a handful of many similar ones, but, at the same time, completely unique.